There is a lot that an area can tell you about the past without you having to dig any holes or carry out expensive surveys.

The history and archaeology of the woods is extensive and diverse.

The first thing that many people comment on is the veteran beech trees; it is not known when or why some of these were first planted, but many of the pollards have probably not been cut for 150 years. If you look carefully you will see that some of the beech trees are planted in avenues. These first appear on a map of 1870 but were not present in 1841 when the tithe map shows that coppicing was going on where they are now sited. It seems probable that they were planted between these dates to line tracks from a farm that was situated to the north east of the wood and has now disappeared.

A pollard is a tree that has been lopped above ground level. The height at which they are cut is usually about 7-8ft. In many cases this was carried out to provide firewood or shape timber for ships at a height at which grazing animal cannot reach. In many cases pollard trees are found on boundaries, but in Bluebell Wood they are found in several areas including one in a pit. There are a row of beech trees marking the Parish Boundary, and a few others which seem to mark old boundaries as well as those in the avenues.

Another feature of the woodland is the large number of pits as well as the bank and ditch formations, which criss-cross the woodland. Since the Bluebell Wood Volunteer Group was set up in 2003 it has been helping to map the archaeological features of the woodland.

We believe that some of the banks are ‘lynchets’, similar to those found on Catherington Down. These were field systems dating back as far as the Bronze Age, when we think that the woodland may have been felled and used as farmland. The presence of tumuli in adjoining private land reinforces this theory, as the tumuli would not have been visible if the area was wooded. However, as there are what are thought to be ‘assarts’ or cuttings into the woodland on the southern edge, we think by their size that the woodland may have returned by no later than medieval times; probably a lot earlier. 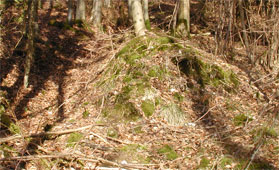 One bank in particular is of interest as it splits the woodland in half and is the Parish Boundary between Clanfield and East Meon. It is believed to be of Saxon origin and was probably a hundred boundary. One reason that we believe it is Saxon in origin is the profile of the bank and ditch.

There is also a similarly large bank and ditch running between the historical boundary of Blagden Copse and Hyden Wood (east), although in the recent past the boundary has moved to become the edge of the Little Hyden Lane footpath. The bank can still be seen to the west of the path, although now truncated, there is evidence thst this bank continued accross what is now the footpath and joined the parish boundry as it runns down the east of the track.

Other features prominent in the woodland are the number of pits of varying sizes and shapes. It believed that some were used as either flint or marl pits but others are less clear. One theory is that some of the pits on the edge of Little Hyden Lane were used as saw pits, although it is known that the Navy used parts of the woodland in WW2 so these features could be foxholes; we hope in the future to be able to dig some of the features to discover their origins.

To summarise our current thinking:

We believe that Bluebell Wood was felled during or before the Bronze Age and is therefore secondary woodland. This is supported by the lack of certain AWVPs.

It was used for farm land during the Bronze Age.

At some point after the Bronze Age; somewhere between the Iron Age and late Saxon times, it returned to woodland. This may have been a conscious decision by the owner, or it may have lost its value as farmland.

Some time no later than medieval times, ‘assarts’ were cut into the southern edge of the woodland to increase the area under farming.

This means that although the woodland is secondary, and is not part of the original ‘Wildwood’ of the British Isles, it could still be up to 2000 years old, and is certainly more than 600.

Old records show that this was never part of the Forest of Bere. This area was never owned by the King and was not a Royal hunting forest.

This message is only visible to admins.
Problem displaying Facebook posts.
Click to show error
Error: Error validating access token: The session has been invalidated because the user changed their password or Facebook has changed the session for security reasons. Type: OAuthException Subcode: 460